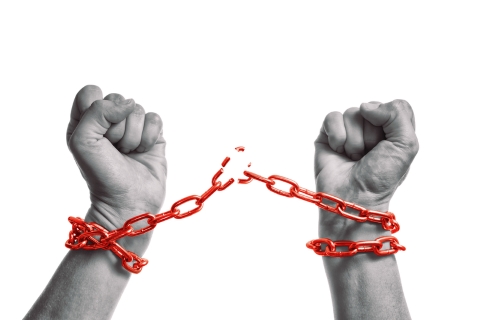 In the beginning, an obsessive infatuation can feel amazing. Not only do you get the natural giddy high of euphoria, but the romantic surrender of being completely besotted also has fairy-tale appeal. Meeting someone so special that you fall head-over-heels for them is intoxicating, invigorating, exhilarating. Even daydreaming about them can give you a little hit of bliss. It isn’t an exaggeration to say that you can’t get them out of your head.

After a while, though, that cliché can become alarmingly true. You really can’t get them out of your head.

At that point, the thrilling highs of early infatuation transform into a stressful obsession – and that trap can be even worse if your rational mind knows that there is no hope of a relationship developing.

Maybe you have been brave enough to declare your feelings and been rejected. Maybe there are barriers that mean you can’t be together. Maybe you can see that they are not right for you – perhaps even serious trouble – but you just can’t get your feelings to catch up with your intellect. Regardless of the ultimate cause, being obsessed with someone you cannot be with is exhausting and distressing.

Being stuck in a mental state of intense, relentless, unquenchable romantic obsession is miserable. Fortunately, there are strategies that can help lessen the obsession, get you unstuck, and free you to enjoy a healthier, happier future.

You just have to be methodical.

1. How serious is the obsession?

Step one in the recovery process is to do an honest audit of the state that you are in. Is this a crush that is likely to naturally run its course, or has it transformed into a more disruptive mania that is degrading your quality of life?

Profound romantic infatuation is known as limerence. This is an altered mental state, characterised by extremes of mood (exhilarating highs and devastating lows), intrusive thoughts that are hard to resist, and a compulsive craving for contact with your “limerent object” to satisfy a craving that feels like addiction. In fact, limerence is well described as addiction to another person.

If the symptoms of limerence resonate with you, then it’s likely that your obsession won’t just fade away with time and hope. It’s going to need deliberate action.

2. Recognise that it’s happening in your head

Romantic obsession is, by definition, an internal experience. Limerence truly is an altered state of mind, and the consequences for the way you think, feel and behave are far-reaching. The neuroscience of limerence is similar to other forms of behavioural addiction.

One conclusion that follows from that blunt reality, is that the solution to the obsession also lies within your own head. That’s where the work needs to be done to weaken the intensity of infatuation, and regain a more realistic perspective of what’s happening to you. While this is sobering, it is also empowering – you are not dependent on external forces to recover. You can do the work yourself.

A mistake that many limerents make is to look outwards for solutions to their internal pain. Unfortunately, you won’t be able to organise the world in a way that protects you from triggers. You can’t expect the person you are obsessed with to change their habits or behaviours, or stick to rules of engagement that you set out, nor depend on other people to limit your access to social media or real-world contact.

Even if your limerent object’s behaviour has been unreasonable, and they are deliberately making it hard for you to emotionally detach, it’s still going to be you that sets boundaries and plots a path to freedom.

Adopting an internal locus of control is the foundation for recovery.

If it is clear that you are not able to have a relationship with the person you are obsessed with, that actually provides very valuable clarity of purpose. You just have to convince yourself to feel it as well as think it.

Uncertainty is rocket fuel for limerence. The most powerful accelerant is the possibility that maybe, under some circumstances, if the world was different, or if you could just find the right combination of words or actions to seduce them, you could end up together. The combination of hope and uncertainty keeps us in a state of heightened arousal, overanalysis, and delusional optimism.

If you can see clearly that there is no hope, you can free yourself from that trap. Let go of the crazy “what if” scenarios that your subconscious is desperately serving up in the hope you can keep the dream alive, and accept the cold shower of reality that it’s a false hope that should be abandoned for the sake of your future.

For most people, most of the time, romantic rejection is the likeliest outcome of any new encounter. It’s bruising and demoralising, but there is power in accepting reality as it is, and striving to keep going towards a better future.

4. Understand how and why obsession is reinforced

Obsessions are cultivated. There are some habits of mind and behaviour that result in us training ourselves into becoming obsessed, even if we don’t mean to.

The first habit is making them central to your thoughts and decision-making. Limerents are world-class at rumination. We review every encounter we have with them and comb it for hidden sources of hope. We plan ahead for how we can charm and amaze them the next time we’re together. We construct elaborate daydreams about idyllic time together, opportunities to connect, or the sultry adventures we might enjoy together once our romantic triumph is achieved.

We link the reward of pleasurable daydreaming to them, until we get stuck in a cycle of seeking that reward unconsciously. Over time, this limerent reverie can become our primary method of mood regulation. Whenever we feel down, defeated, anxious, our subconscious has learned that a nice limerent daydream will soothe the pain.

That is path to intrusive thoughts – where the fantasies come unbidden and intrude even when we are trying to concentrate on something else. Through repeatedly saturating ourselves in rewarding fantasies, we make seeking them our primary motivation in life.

The second major reinforcing habit is romanticising the connection. We make sense of the world by telling ourselves stories, and there are many great dramas (and comedies) built around romance. If we make sense of an obsession by telling ourselves a story about star-crossed lovers, the power of inescapable destiny, or true love conquering all, we lay down the whole mass of our inherited folklore to weigh the scales in our favour.

Those habits need to be broken if you want to free yourself of obsession.

5. Disrupt the old patterns of thought

To break the old habits that reinforce limerence takes active effort. You have to reverse the mental programming that you’ve accidentally installed in your brain.

There are several techniques that can help with this process, but the heart of it is breaking the association between the person you are obsessed with and reward. In fact, it’s even better if you can make thinking about them aversive.

This kind of deprogramming can be as simple as dwelling on all the negative experiences that you have had with your limerent object, rather than dwelling on the positive. It can involve focusing on their personal flaws (rather than dismissing them as charming but forgivable quirks) and deliberately spoiling any of your favourite fantasies. It can involve muting their social media.

Weakening the old habits requires a combination of countering idealisation and limiting contact.

6. Focus on a better future

Finally, and perhaps most fundamentally, the psychological project of reversing obsession will only work in the long term if you spend some time addressing why you were vulnerable in the first place.

If you are single and looking for love, then this is not too demanding. Seeking a romantic connection is healthy and a major part of a purposeful life. If you have just become infatuated with someone unsuitable, then the work of finding someone better is at least straightforward (if not always easy).

For those who have become infatuated with someone outside of an existing long-term relationship, then there are other issues to address. What was this new person representing to you that was perhaps missing from your life? Have you allowed benign neglect to erode your connection to a spouse? Are you playing out a pattern of unstable attachments because of personal history that has made you attracted to dodgy people?

The basis of limerence, and romantic obsession generally, is reward seeking. You crave connection with another person. Without alternative sources of reward, it will be hard to give up on the remembered high when infatuation made you feel more alive, energised and euphoric.

When you resolve to break the old bond that was keeping you obsessed, you need to have a positive, new reward to look forward to. The best approach to this, is to take an honest review of your life, what you really want out of it, and begin to imagine a future free of obsession where you are able to pursue those purposeful dreams.

Finding that source of purpose and taking decisive action is the best and lasting cure for obsession.

Are you a limerent ? (quiz)
Limerence, libido, and the challenge of long term romance
What to do if you are married but limerent for someone else
Deprogramming the limerent mind