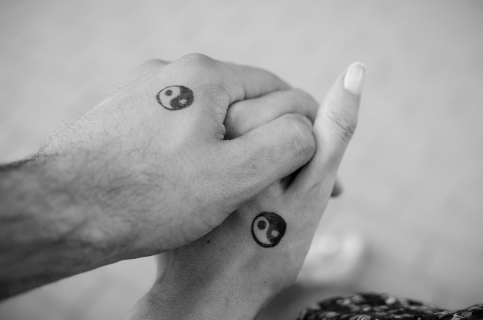 One of the biggest difficulties in romantic relationships is the conflict between two necessary factors: chemistry and compatibility.

Chemistry is the visceral excitement of desire – the sparky, exhilarating thrill of connection, the hungry craving for intimacy, the natural, animal magnetism of lust and sensual energy. You want each other.

Compatibility is less showy, but no less important. It is the comfort of harmonious companionship, the trust, security and warmth of mutual admiration and affection. The confidence that comes from shared goals, shared hopes, and a shared life.  You “get” each other.

Either one of these forces alone can make a relationship seem viable, but without both it tends to feel incomplete. Even worse, the two forces sometimes seem in opposition – how can you be excited by someone who makes you feel safe? How can you relax around someone who arouses you?

This conflict is especially challenging because we also intuit that chemistry or compatibility can’t be forced – you either click or don’t – and faking it isn’t going to work, because the feelings are too deep and fundamental to our emotional makeup. You can try to ignore the lack of either for a while, but such willful blindness dooms the relationship to a slow defeat.

So, how can we square the circle? Is it better to favour chemistry or compatibility? Or is there a way to find someone with whom you have both chemistry and compatibility?

Let’s work through the possibilities.

All chemistry and no compatibility

The first scenario to consider is chemistry in the absence of compatibility. Limerence really helps to highlight this problem, being the kind of chemistry that resembles nuclear fission.

Chemistry for limerents is revealed in the glimmer – that sense of romantic potency in another person that is ignited by subconscious cues that we rarely understand at a rational level. Romantic chemistry is situated in the subcortical parts of the brain – the people we find attractive are firing up brainstem circuits that were programmed by nebulous past experiences. Ones that we often didn’t even realise would come to shape our romantic sensibilities.

The wild complexity of our personal histories have made us responsive to certain physical and behavioural traits in others. Alchemy might be a better term for this phenomenon than chemistry, shrouded as it is in veils of uncertainty and psychological mystery.

It’s a nice theory, but like all unifying ideas, it captures a core truth while missing a lot of details. Everyone we meet will be our opposites in some ways and alike in others. In reality, the psychological basis of attraction is likely to be so complex that it defies neat explanations.

A final important point for chemistry is that it can sometimes be hard to distinguish excitement from drama. Arousal is a critical component of limerence, but being enthralled and enchanted are not the same thing. Some people can be very stimulating company, but not necessarily because they connect to a deep part of our romantic selves. Sometimes sparks fly because of friction, rather than electricity. It can be confusing to distinguish between someone who excites through provocation rather than attraction, especially if conflict had been a part of our family life.

Chemistry, by its nature, is explosive. It can burn hot and thrilling early on, but it is difficult to sustain that in a long term relationship. If limerent chemistry has led you into a relationship with someone who is exciting but incompatible, you can end up in the trap of exhilaration turning to exasperation. If you have bonded with someone who is your opposite, you now need to try and reconcile yourself to living with someone who has conflicting needs. If they want to socialise every night (which you were happy to go along with when you were first infatuated), but you are worn out and want to curl up together on the sofa… well, the incompatibility quickly becomes obvious.

Chemistry is amazing, exhilarating, and brightens life, but it also burns out. You can’t heat your home with fireworks.

The opposite scenario is bonding with someone who is compatible, but who doesn’t excite you romantically. Compatibility is a lot more predictable than chemistry. It’s relatively straightforward to understand which people will work well together in a loving companionship. People who have similar worldviews, who have similar values, and matching personality types. Sure, there is scope for opposites to attract, but it’s hard to imagine a harmonious union between a conscientious, orderly person and an absent-minded hippy.

This is one of the reasons why most marriages are between people from similar ethnic groups, similar socioeconomic backgrounds, and similar levels of education. The familiar is comforting. And if that idea strikes you as limiting and conservative… then you are likely to seek a partner who matches your profile: open to novelty, new ideas and unconventional lifestyles.

The trap of compatibility is different from that of chemistry. Compatible people are not prickly or infuriating. There isn’t likely to be painful conflict or explosive disagreement. Instead, there is a danger of slow, stultifying enervation. A complacent slide into a sexless marriage. A lack of fulfillment, and a sense that life should be more, well, lively.

That can lead to a hunger for excitement that cannot be met by someone who you know so well that they are achingly predictable, and the possibility of limerence developing for someone new, to try and meet the need that you were not even fully aware was building up in your subconscious.

How to balance chemistry and compatibility

So far this review of chemistry and compatibility seems like a counsel of despair, as though the two forces are irreconcilable. I don’t think that’s true. I think it is possible to balance the two forces, but it depends on trying to cultivate what is termed a dynamic equilibrium. This is a concept from literal chemistry, rather than metaphorical chemistry, and describes a stable state in which opposite reactions are perfectly balanced. Basically, the reactions are matched, so that despite constant movement back and forth, the overall system ends up in a steady state.

The romantic analogy I’m trying to draw is that you need to try and find a sweet spot where there is enough chemistry and enough compatibility to keep your relationship in a state of healthy tension. Too much of either and it will crash and burn, or cool and freeze. You want an ongoing balance between excitement and security, between arousal and relief, between stimulation and comfort.

How do you get to this Goldilocks state?

First things first, understand your triggers. What causes the glimmer for you? What do you really want in life? Where will you find purpose? What kind of person is likely to help you feel good about who you are, but also help you get even better? Self-awareness and self-honesty is critical for crafting a purposeful life. Without it, you will continue to be led by instinct, and unthinkingly react to whatever urges bubble up from your subconscious.

2. Resist the glimmer if they are obviously incompatible

Chemistry is great, but before you embrace it wholeheartedly, take a moment to try and cool the passions and assess the prospect of compatibility with your potential limerent object. If you find yourself always responding to dodgy LOs then you should be sceptical of your prospects for forming a long-term relationship with the most chemically reactive people. A basic sense-check is needed if you are hoping to bond with someone who could be a significant other. Resist the siren song of limerence if your rational self can see there is nothing but fireworks and pain in the future.

3. Don’t resist the glimmer if they aren’t

As a counterpoint to the previous point, if the LO is not obviously incompatible then don’t run away from the glimmer as an inherently dangerous experience. Limerence doesn’t last, but it can be the prelude for long-term love if you are fortunate enough to find someone exciting who is also potentially compatible. Balance means a bit of both. Enjoy the thrills of limerence if there are no obvious red flags, and you want to get to know them better.

4. Meet in the middle

That leads to the next point: no one will be a perfect match, so you need to find someone who will be a good counter to your unfortunate traits. The ideal scenario is to find someone who is different enough to be interesting but similar enough to be compatible – with a bit of compromising. The absolute sweet spot is when the “compromising” actually ends up enhancing both of your lives.

Think about an introvert meeting an extravert. If they are both at the extreme ends of the spectrum, then conflict and incompatibility is inevitable. But if a moderate extravert can meet someone a bit more introverted, then they can compromise a bit and become more comfortable with time alone and cultivate a bit more tolerance for boredom. Likewise, their introvert partner can be encouraged to have more social experience and some enriching experiences out in the world rather than in their own head.

If the average of your two natural states is good for you both, you are onto a winner.

Finally, one of the surest ways of managing a long-term relationship that is both stimulating and comforting, is to find non-romantic sources of fulfilment that make your life more interesting, and make you more interesting to your partner. Relationships tend to work best when two people are working side by side to build a life they both desire. Like everything else, it’s a dynamic tension: independent but partners, committed but autonomous, together but self-determining.

Mastering that ability to balance forces, to walk the emotional ridge, is the best hope for finding lasting happiness.