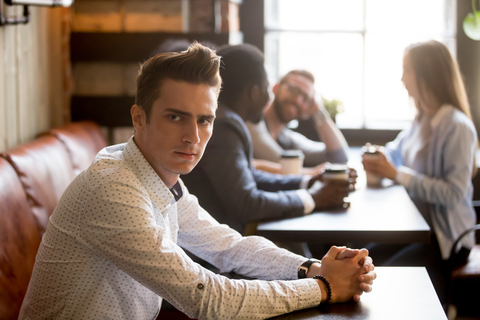 Another visit to the virtual coffeehouse, where important issues of the day get decided by important people.

Today’s topic is stimulated by commenter Blue Ivy. She’s dealing with limerence for a boss who is apparently not interested in her romantically, but has now started getting jealous when she praises other men.

Blue Ivy is clear that this isn’t standard sexual jealousy over flirty behaviour – which would anyway be a bit rich considering LO is not in a relationship with her – but happens in response to ordinary professional praise of co-workers as part of the job. It takes the form of a noticeable withdrawal of camaraderie, and a reactive dislike of the men who were praised.

I think this is an interesting scenario, as it reveals a lot of subtleties around limerence reinforcement and limerence recovery.

First, Ivy’s LO could obviously sense her attraction to him and liked it. Even if he wasn’t intending to act on it. Even if – by her report – he isn’t generally a narcissist who seeks validation, he was still getting something out of her limerence in terms of emotional nourishment.

This might not be conscious on his part. He just feels good when Ivy is around being all friendly and supportive and interested and… well, into him. Limerence can charge us up with a sort of sparkly energy that can be very flattering and enjoyable for the LO to receive.

Naturally enough, the loss of that ego boost, and seeing the warmth being bestowed on other men, feels bad. LO might even feel a bit ashamed and guilty about his jealousy too, if he is self-aware enough to know it’s unjustified.

Many people act on such feelings by going into a sulk.

Second, from Ivy’s perspective, noticing jealousy in an LO is powerful reinforcement that jeopardises recovery. As she colourfully puts it:

The part of me that I want to eviscerate (LE in my brain), rises up from the dead with hope when that happens. Ugh.

If an LO is jealous, that means they care. It means they noticed your limerence, liked it, and don’t want to lose it, which means there is something there. Some recognition of a personal connection that has a element of intimacy. Some ember of attraction that could be fanned into life.

This is perilous for recovery, because just when you have accepted that you need to move on and that there is no future in pursuing the LO, their jealousy kicks in and makes you doubt your decision. Did you give up too soon?

Third, it helps illustrate that the road to recovery is rarely smooth, and has unexpected obstacles along the way. Relapses sometimes come from external forces we didn’t anticipate or mentally prepare for. An LO’s behaviour isn’t always predictable or rational. Sometimes, an LO won’t let go. That helps illustrate how valuable maintaining a recovery mindset is for staying the course.

In Blue Ivy’s case, I’m optimistic, because she is analysing the situation rationally, and even though the ups and downs of hope and frustration are turbulent, she is viewing her experience from the perspective of thwarted recovery. The story is one of delayed freedom, not a reversal of fortune.

But overall, there’s no avoiding the fact that an LO’s behaviour can hinder your recovery.

So, that’s the topic for discussion: how best to handle a jealous LO, how to resist the temptation of backsliding, and how to judge what their jealousy means about how they feel about you.

Would you complain? Ignore it? Use it as deprogramming material?

If you’ve had your own experience with a jealous LO, let us know how you managed…