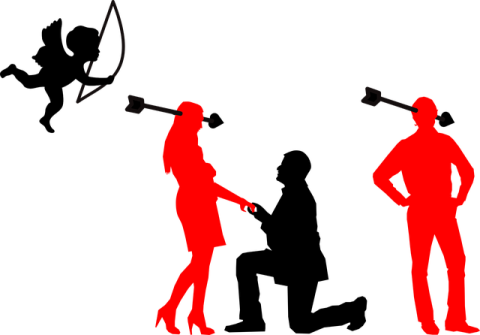 A common feature of limerence for many people is a feeling that your ordinary life has been struck by a powerful external force that has changed your perceptions, your priorities, and your ability to regulate your own emotions. There are lots of fairy tale representations of this phenomenon – Cupid’s arrow, potions of enchantment, True Love – that help to cement the idea of a magical or spiritual driving force for infatuation with a particular person.

A key realisation for managing limerence, is recognising that this sense of an “external force” is an illusion. Even once you accept the reality that limerence arises from within you, and that you are providing the fertile soil of imagination in which it grows, it can still be hard to fully shake off this idea. Frankly, in many cases, LO can reinforce your sense of special connection by encouraging emotional intimacy, or radiating an aura of attractiveness that seems uncanny. Despite wanting to resist, limerents find themselves baffled by their own helplessness when LO turns on the charm and makes them dance as though bewitched.

So, how much blame must LO’s bear for the development of limerence? Should flirts bear some responsibility for misleading hapless limerents? Is there some truth to the idea that limerents are powerless to resist a predatory LO’s powers of enchantment? Just how culpable are LOs in feeding the mania?

Let’s work through some case studies to figure this out.

One of the most powerful counter-arguments to the idea that LO bears some blame for the emergence of limerence, is the existence of oblivious LOs. A good example is discussed (at possibly a little too much length, if I’m honest) in Tennov’s book. It involves a young man, Fred, who was studying abroad in France for a short period, and became limerent for Laura, the receptionist of the hostel in which he was staying. It is clear from Fred’s diary entries that the “relationship” between them was superficial, business-like, and (as he knew himself in lucid moments) nothing more than the friendly acquaintance that would be expected for someone in Laura’s position.

This case is a clear cut example of Laura becoming an LO simply because she was there. Fred “needed” a limerence experience for some reason of his own, and it grew from an entirely one-sided fantasy played out in his head. His only explanation for the triggering of limerence was a moment of chance closeness (when helping her deal with an overfed fire), followed by a glance when paying his bill:

It was the way she looked at me that did it

Really, Laura did nothing to encourage him – and a fair amount to discourage him – and yet he succumbed to limerence regardless. In this sort of scenario, it is hard to think of anything that the LO could be blamed for.

At the other end of the scale, we have the narcissist LO. They see the limerent as a source of narcissistic supply, and delight in keeping them hanging on, validating their own wonderfulness. In these cases there seems plenty of blame for the LO; they may even have initiated the initial glimmer, fanned it into a flame, and then cultivated an attachment on their own terms. Even worse, because these LOs are not emotionally invested themselves, they can run hot and cold with the limerent, depending on what other entertainment they have in their lives. If they are bored, their pet limerent will be stroked and cajoled and given attention. If they have spied another shiny object they want, then the limerent is an irritation and treated disdainfully or ignored. This feeds the uncertainty engine of limerence.

This is the scenario in which vulnerable limerents can reasonably feel they have been treated unfairly. Once the pattern of behaviour is recognised, however, it is then up to the limerent as to whether they decide to continue the dance.

This is a tricky one. If both limerents are single, then Happy Days. But if they are not both available, then a mutually destructive spiral of behaviour can unfold where they oscillate between drawing together and then drawing back. It is also likely that the strength of the limerence will vary – both between the two, and over time – and so one can be pulling when the other is pushing, and that unsettles both, and so the unhealthy tug of war continues. In the thick of an episode like this, the idea of apportioning blame is a bit redundant: both participants are both instigator and sufferer, and whoever is most blameworthy can vary day by day.

The preceding extreme cases are easy to understand and mentally organise. However, to judge from my inbox, far commoner is a situation where the LO is ambivalent, or hard to “read”, or non-committal in one way or another. Here we are on more middling ground. Sometimes, the limerent feels encouraged by something LO says or does:

he always kisses me goodbye, and holds on tight

But sometimes they are discouraged:

he says that it’s complicated at the moment, and he’s sorry if he led me on

she gave me a hug, but whispered ‘you should stay away from me’ in my ear

Whatever the real situation, it becomes very difficult to disentangle who said what or did what or led whom on. But ironically, this incredibly common and complicated and confusing situation, clarifies everything.

Yes, LOs may sometimes be “getting something” from the limerent in a way that is selfish and transactional, but here’s the thing: so is the limerent. Without fail – by definition – the limerent is getting an astonishingly powerful emotional high from the company of the LO. And we limerents very often don’t ask nicely, or behave transparently, or admit that our friendship is not really just a friendship to us. We keep going back day after day to get our happy fix. We share intimacies, because it lights up our reward pathways and makes life seem more vital, more colourful and more exhilarating. We hang around waiting for the “I feel safe with you” comments, because of the thrill that gives us.

So, ultimately it comes down to this: we can hardly blame our self-centred or ambivalent LOs for sometimes using us for their own emotional needs, because that’s exactly what we are doing to them. Much healthier than trying to tally blame and convince ourselves that they are more in the wrong than we are, is to focus on what we are doing, what choices we are making, and what we want to do next.  We have to decide who’s in control of our lives.

From the perspective of an unhappy limerent, it doesn’t matter how much to blame LO is: you have to decide if you are going to let it continue. They could be the biggest flirt, or give you more mixed signals than a mis-wired telephone exchange – all you have to decide is do you want to leave them in charge of your fate? Are you willing to subordinate your life to an asymmetrical relationship? Or do you want to take responsibility for your conduct, and accept that they will behave as they choose?

Nobody ever got over limerence by proving to themselves that it was all LO’s fault. Taking charge of yourself is the path to freedom.