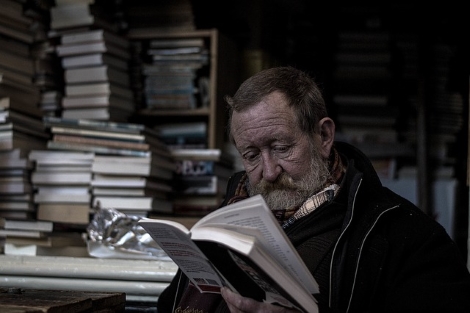 Reader Samantha got in touch with me a while ago to ask for more information about living a more purposeful life. Specifically, she asked about the books that I would recommend about purposeful living and what it means. I confess it’s taken me rather a long time to reply (apologies, Samantha), because, somewhat surprisingly, I found it a difficult question to answer.

The main reason is that there isn’t a specific book or site or resource that I could put my finger on as emblematic of my conception of purposeful living. Like many introverts I read a lot; basically all the time. And it struck me that the nebulous ideas I’ve tried to capture under the term “purposeful living” are kind of distributed across a rather eclectic reading list. I also have a bit of a contrary nature and read things that I disagree with, to better understand other people, and so hesitate to recommend books that irritated or angered me but nevertheless had some nuggets of wisdom within them.

After this typical period of centrist dithering, I decided to stop being so precious and just throw out a list of the most memorable and thought-provoking books that have helped shaped my notion of what a purposeful life means. In no particular order:

The Power of Habit, Charles Duhigg

A great summary of the psychology behind much of our behaviour. A real eye-opener on how cautious one needs to be to avoid coasting along familiar tracks through habit, and how important it is to be much more active in decision-making. Also, some good practical advice on how to break bad habits and establish good ones.

Another classic for understanding how your mind works. A great primer for how our various cognitive biases, mental short-cuts, and quick-and-dirty intuitions can lead us to make flawed decisions. A good lesson in why it often pays to think slowly and carefully before taking action.

Women who run with the wolves, Clarissa Pinkola Estes

A really poetic and thought-provoking journey into the Jungian conception of the subconscious. Weird and wonderful in places, and uses a very powerful device of telling archetypal stories as a way of illuminating fundamental aspects of human nature. Focused on the female experience, but not limited to that.

A milestone of self-development. A perennial bestseller. Basically, a manifesto on how to live an effective life and be a positive influence on the world. (A bit dull in places, though).

I’m not a big fan of the School of Life, but this was the first Alain de Botton book that I read, and I still love it. A humane, comforting, and concise summary of what the major schools of philosophy can offer to improve modern life. This was the first place that I came across the teachings of Seneca and is a great gateway drug to the hard stuff.

Arnold: The education of a bodybuilder, Arnold Schwarzenegger and Douglas Kent Hall

A case study in the power of single mindedness. Whatever you think of the Austrian Oak, he is a force of nature and has a phenomenal work ethic. As he put it in a commencement speech once “Nobody ever climbed the ladder of success with their hands in their pockets.”

Fascinating, surprising, depressing, inspiring. A deep dive into why some people achieve extraordinary things, and how small advantages coupled to positive feedback loops can play a decisive role. Another great example about how hard work and marginal gains can lead to compounding successes.

A man I have always admired. A fascinating life and the key player in the thawing of the cold war.

A bit of an annoying read, but interesting nonetheless. Don’t bother trying to fathom “the secret”, but do take away the core point: you have to decide that you want to succeed and work for it. That emphasis on active choice retains its power, despite the dated case studies.

A lean but idea-rich book on how to achieve the important things in your life, without neglecting other responsibilities. A productivity and prioritisation guide from a businessman who also seems like a genuinely nice guy. The weird title comes from a paraphrased Mark Twain quip: “If the first thing you do each morning is to eat a live frog, you’ll have the satisfaction of knowing it’s probably the worst thing you’ll have to do all day.”

And, of course, it goes without saying, Love and Limerence, Dorothy Tennov.

Since starting the site, I’ve had several readers recommend books for me, and some of them have been gems. So please, wise LwL-ers, fill up the comments with your own recommendations…