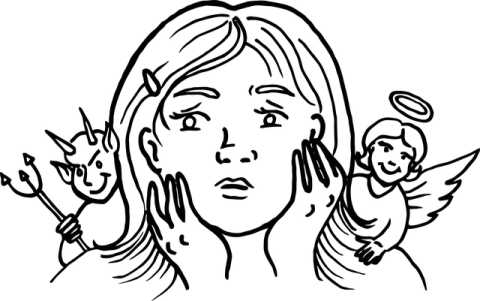 Following on from previous musings about how breaking the limerence habit can feel like an battle with an internal version of yourself that is greedy and has poor impulse control, I’ve been thinking about the weirdness of being in conflict with yourself.

From a neuroscience perspective, this is all a bit “just-so” story – what’s actually happening is a complex mix of network activity in different regions of the brain leading to conflicting drives – but it really feels like there is a mischievous part of ourselves trying to tempt our better parts to misbehave.

Interestingly enough, psychologists (or at least psychoanalysts) have long used the idea of subpersonalities as a model for explaining behaviour. Famously, Freud talked about the Id, Ego and Superego, and Jung talks about the Shadow, the Anima/Animus, and other nebulous metaphorical figures that we should seek to integrate into our personalities to become psychologically well-balanced.  This sort of thinking can be generalised to the concept that we are an amalgam of various subpersonalities, squabbling in an internal mental committee, each of which can become dominant under the right external circumstances.

It has a sort of narrative appeal, this idea. It’s easy to think that, yes, there are distinct subpersonalities that manifest when we are angry, or lustful, or scared, or stressed, which are part of ourselves but behave quite differently from our normal, rational selves. So, despite the fact that it isn’t literally true, I’ve been wondering if this idea is nevertheless useful as a way of conceptualising and managing limerence.

Optimistic at first. Creative, maybe. Given to joy, flirtation and impulsive behaviour. But also jealous, selfish, monomanic, and compulsive. In the longer term, it would also be obsessive, aggressive (in terms of its demands on our mental attention), irrational, and prone to spectacular mood swings.

When does it commonly manifest?

Often, when we are stressed or lonely. That is when we are most motivated to indulge it, and succumb to it’s siren-song temptations of excitement, romantic thrills, personal connection, and pleasurable reward. The big issue with limerence, though, is that once it has got dominance, it makes itself totally at home and refuses to leave. That’s the sinking sensation for limerents of realising that they’ve tipped from neurochemical high to addictive dependency.

How can we integrate it into ourselves?

The need to confront and assimilate the Shadow is a Jungian concept. The idea is that the unconscious parts of ourselves constitute our shadow self, and must be contended with, understood, accepted, and assimilated if we are to fully succeed in “individuation”.

Projecting this onto limerence, it would mean accepting that the limerent subpersonality is a part of us, that it brings positive and negative traits, and that it must be understood, recognised (i.e. properly seen and respected), and acknowledged. That does not necessarily mean it should ever given dominance, though. Integrating the shadow doesn’t mean occasionally allowing it free reign. You may feel murderous rage occasionally, but that isn’t reasonably integrated by adopting a “one murder a year” allowance.

So, overall, is this useful? I’m a bit on the fence, to be honest. I can certainly see some value for people trying to calm or tame their limerent tendencies, to view their challenge in terms of a wrestling match with a part of yourself that has taken over and is making unreasonable demands. That could be a productive way of making sense of the battle ahead. But for me, limerence feels more like a change in mental state than the temporary dominance of a competitive subpersonality. I’m still myself, just in a more sensationally-heightened state.

I would describe the experience more as a weird sort of fracturing between my psychological/rational self and my emotional self. It was as though I was observing the turmoil within myself with surprise and confusion. My emotional triggers were no longer aligned neatly with my thoughts, and I would occasionally literally become speechless when trying to express myself honestly as the two forces (rational thought and emotional urge) conflicted. So, in a sense, that is conflicting subpersonalities, but I didn’t commonly experience a devil whispering in my ear. It was more like an inarticulate emotional urge willing me to be irresponsible.

It really is quite hard to put this stuff into words. Stimulating to have a good ponder, though.